Published on 2 August 2021 under Joint Pain 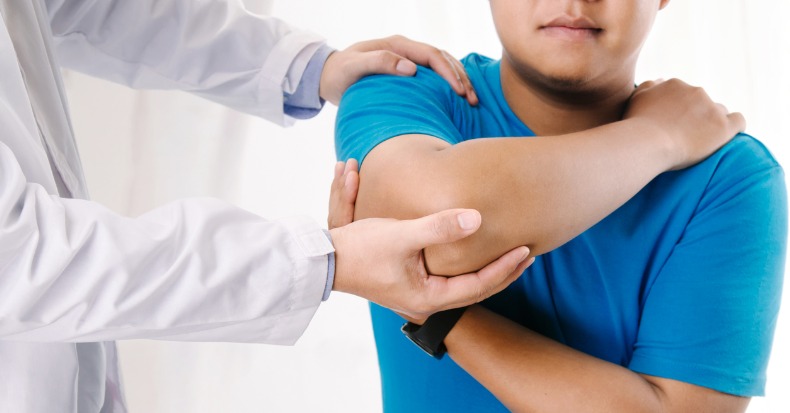 Subacromial impingement syndrome (SAIS) is one of the most common causes of shoulder pain and functional restrictions. This condition is caused when the tendons of the rotator cuff, the head of the biceps brachii, and/or subacromial bursa are pinched or impinged during normal movement. This results in pain and reduced function and range of motion (ROM).

Most people typically envision the shoulder as one joint, but it’s actually four joints that work together to complete complex movements. These joints include the “ball and socket” glenohumeral joint (GHJ), the acromio-clavicular joint (ACJ), the sterno-clavicular joint (SCJ), and the scapulothoracic joint (STJ).

A 2020 study compared the collective and independent movement of these joints in SAIS patients and individuals without a history of shoulder pain. The researchers observed differences between the two groups where symptomatic volunteers consistently demonstrated less SCJ posterior rotation, regardless of angle, phase, or plane of shoulder motion. There was also less STJ motion at 30° and 60° of humerothoracic elevation. The take home message is that treatment to restore movement in SAIS patients must focus on methods addressing the lost motion at the SCJ, ACJ, and STJ as well as GHJ!

What’s the best approach for managing SAIS? Two excellent conservative options include manual therapies and specific shoulder exercises. One study compared these approaches in 40 SAIS patients who had shoulder pain/disability for longer than six weeks. Patients in both groups reported similar outcomes as well as high satisfaction with their care. Another study found that patients who received both treatments concurrently achieved greater improvements in pain and function than those in an exercise-only group. Doctors of chiropractic often utilize a combination of manual therapy and specific exercises when treating patients with SAIS.

In addition to treatment focused on the shoulder joints, chiropractors will also assess nearby structures because their interaction with the shoulder can affect these joints as well.  In one study, researchers reviewed MRIs of SAIS patients and found that 35% had nerve root compression on the same side as their affected shoulder, which can result in similar symptoms. Another study found that joint mobilization therapy and exercises to address dysfunction in the thoracic spine resulted in improved shoulder range of motion.

If shoulder pain and/or reduced shoulder range of motion affects your ability to work or carry out other activities of daily living, consult with a doctor of chiropractic to see if this conservative treatment approach will benefit your condition.